Tumor Infiltrating Lymphocytes (TILs) are immune cells that exist in the tumor. In concept, these immune cells, particularly CD8+, work to detect the tumor and (most importantly for human health) destroy the tumor. As such, the presence of TILs have been studied as a potential way to predict outcomes for patients and has been found to be prognostic in a range of tumor types.¹⁻⁵ TILs as a read out, however, presents several potentially confounding factors including:

One particular form of dysfunction, termed Exhaustion, has had strong interest from the research community. This type of dysfunction is found during chronic infection. Originally studied in the context of viral infections, T cell exhaustion has been found to be evident in tumor infections as well.⁶

A common way to understand T cell Exhaustion is in comparing acute and chronic infection (of viruses or tumors), depicted in Figure 1 of McLane, Abdel-Hakeem, and Wherry.⁶ In an acute infection, a rising antigen load activates naive T (Tn) cells, causing them to eventually differentiate into T effector (Teff) cells. These Teffs control the infection, causing a peak in antigen load. As this load goes down and the infection clears, the majority of Teffs die and remaining cells differentiate into memory T (Tmem) cells. Tmem cells have reduced cytolytic potential, but are long lived and confer adaptive immunity to future infections.

In a chronic infection, exhausted T (Tex) precursor cells are not able to fully clear the infection, and with continuous antigen stimulation, differentiate into Tex cells. Tex cells retain some effector and proliferative capacity and so can control infection. The infection remains, however, and Tex cells then enter into a terminal lineage and are eventually deleted. 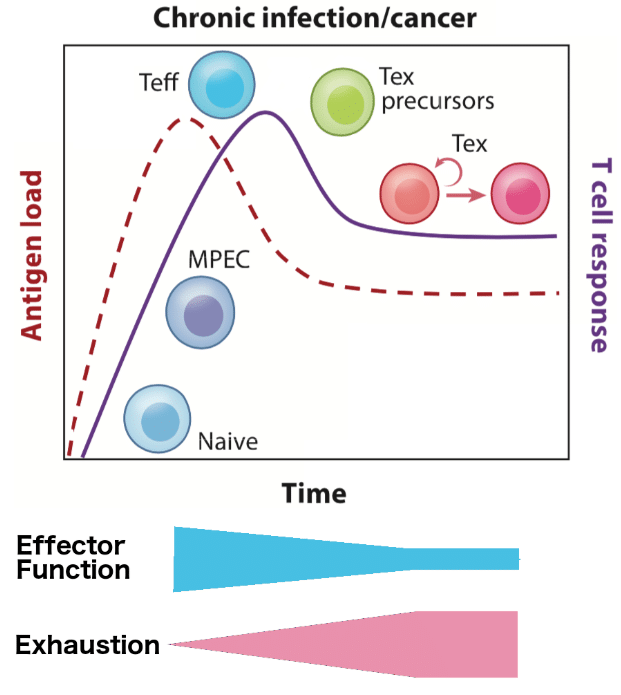 Due to the connection to chronic infections, T cell Exhaustion can be thought of as a physiological process in which there is a degree of exhaustion. In this process depicted in Figure 2 as an adapted version of McLane, Abdel-Hakeem, and Wherry⁶, the host gradually loses cytolytic ability with more exhaustion. During this process, it appears that the response to infection can be recovered, and that exhaustion can be reversed.⁶ However, there may be a point of high exhaustion that this is no longer possible. The exhaustion process also has ramifications in adaptive immunity: with high exhaustion, Tmem cells are not created and thus cannot confer future immunity. These characteristics are of great interest to clinical researchers and pharmaceutical companies who are looking to increase the efficacy of checkpoint inhibitors in controlling and clearing tumors.

Exhaustion as a Cell Type

Another way of thinking about T cell Exhaustion is as a specific subtype of T cell. In this model, Tex cells exist as a subtype alongside naive, memory, and effector, etc. Figure 3 taken from McLane, Abdel-Hakeem, and Wherry⁶ shows T cell lineage and how Tex may exist alongside other cell types of T cells. In this lineage, Tn are activated by antigen exposure and differentiate into Memory Precursor Effector Cells (MPECs). With high and constant antigen exposure, these MPECs differentiate into early Tex cells. With persistent antigen stimulation, Tex cells go into a terminal state. 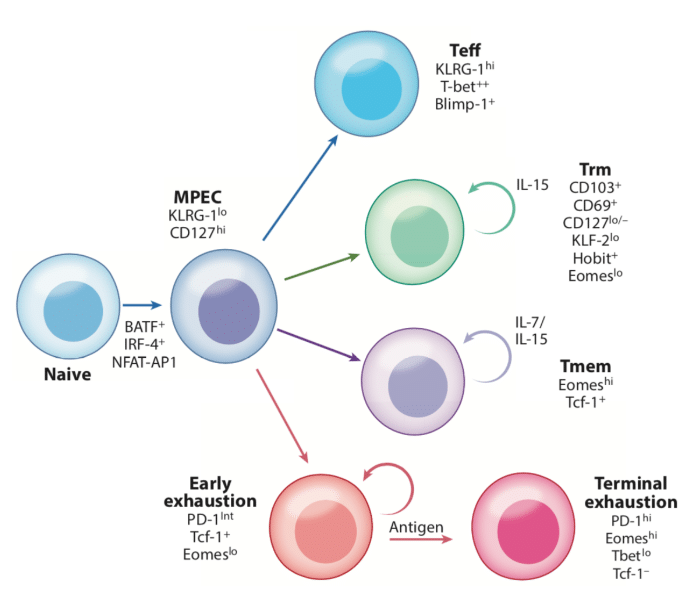 As compared to Teff, Tmem, and Tn cells, Tex is a unique phenotype.⁶ Indeed, Tex cells have large metabolism and chromatin structure differences. Many other characteristics can be used to identify T cell exhaustion, however, the most salient hallmarks are:

T cell exhaustion represents an interesting opportunity in research and medicine. We’ve developed a CD8+ exhaustion readout as our newest service offering and think this readout may help researchers explore reversible exhaustion. In addition, CD8+ exhaustion can be paired with the existing, highly sensitive CD8+, CD4+, and Treg readouts to build a multidimensional biomarker. This multidimensional marker may help researchers mitigate TIL confounding factors and serve as a novel prognostic. Learn more in our whitepaper. 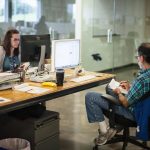 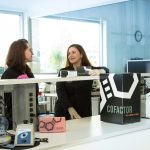