We use both our own and third-party cookies for statistical purposes and to improve our services. If you continue to browse, we consider that you accept the use of these.
By Andy Benesh
Posted March 4, 2015
In RNA-Seq
small size, BIG IMPACT2015-03-042015-03-11https://cofactorgenomics.com/wp-content/uploads/2016/10/cofactor_logo_dark.pngCofactor Genomicshttps://cofactorgenomics.com/wp-content/uploads/2016/10/cofactor_logo_dark.png200px200px

Today I want to briefly discuss microRNAs. Despite these molecules only being ~18-22 nucleotides in length, this RNA species is a rockstar in biology. They put on a big show in the cell, and fans (researchers) require VIP access in order to get backstage passes to identify them in next-generation sequencing data. Let me explain briefly: during standard RNA-SEQ workflows, small RNAs inherently sift out of the sample, and require several alterations to the library preparation to selectively hold on to small RNAs. Since their discovery in C. elegans years ago, the race has been on to identify and characterize these molecules. miRNAs play a major role in gene expression by hybridizing with complementary mRNA transcripts, and thus is an attractive therapeutic tool to treat and/or prevent disease. So why call these guys rockstars? There are many reasons, but their amazing potential is highlighted in cell-fate/reprogramming experiments, which demonstrate that with the right cocktail of miRNAs, introduced for example into fibroblasts, will induce a cell-fate decision towards a neuronal cell type. If you want to read more about similar reprogramming experiments, check out some of the great work being performed down our street at Washington University. 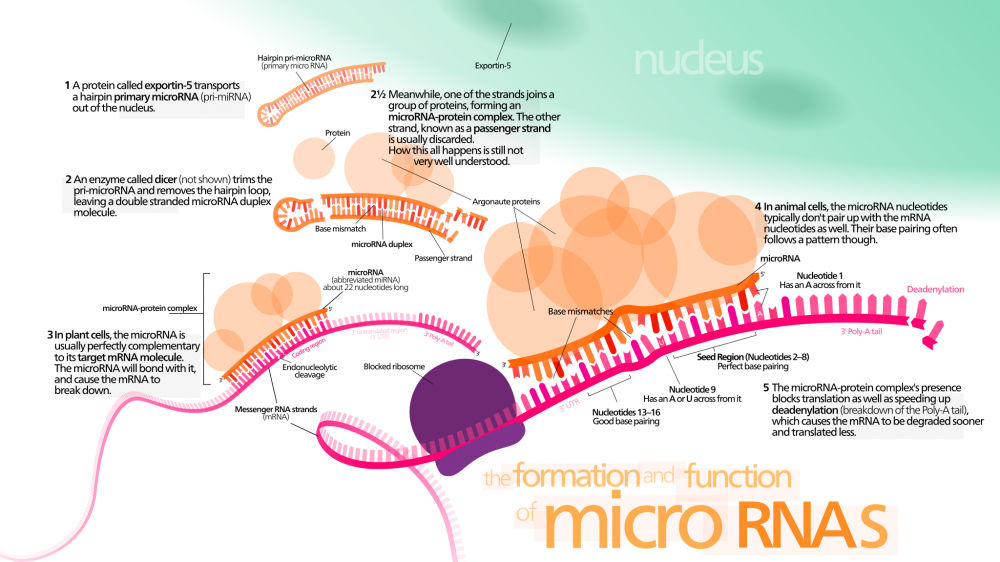 By Kelvinsong (Own work) [CC BY 3.0 (https://creativecommons.org/licenses/by/3.0)], via Wikimedia Commons

A recent review article in the journal Gut caught my attention demonstrating how mature the miRNA field has become . The article focused on miRNAs and inflammatory bowel disease (IBD). Here is some backstory: IBD includes Crohn’s and Ulcerative Colitis, which are both diseases with unknown etiology and unfortunately for individuals with either condition, there is no cure. Twenty years ago, the IBD genesis debate focused on whether the trigger was auto-immune in nature or whether it was a particular environmental pathogen. Later, introduction of genome wide association studies moved the debate forward and found supporting evidence for several factors in inflammation pathways, providing rationale for drug targets such as TNF-alpha. (More recently, agreements between Pfizer and 23andme provide even more promise to researchers and patients). In the Gut review article, the group highlights how IBD scientists are now investigating the role miRNAs may have in these same pathways. And of course the review discusses the therapeutic potential of miRNAs in treatment of IBD (miRNA as a therapeutic tool is still in its infancy). But for a disease that most likely has multiple susceptibility factors, and manifests uniquely in each individual, studies that recognize the potential for personalized medicine must be heartening for patients.

miRNAs are for similar reasons being investigated in many other fields such as cancer and cardiovascular health as potential biomarkers and/or drug targets.