In previous chapters, we have explained the importance of immune-oncology in today’s medical landscape, discussed the basics of immune profiling, and looked at gene expression in immune-oncology. We have specifically focused on the value of RNA-seq in those endeavors. We have also spoken of the need for robust biomarkers that will indicate therapeutic response, allowing clinicians to prescribe interventions with a higher likelihood of success than current processes allow for. Now, we turn to look at one of those emerging biomarkers: tumor mutational burden, and it is exactly what it sounds like. As Caitlin Connelly puts it in a blog review from mid-2017, “the number of mutations within a tumor genome.”

Certainly the accumulation of mutations is a primary factor in tumorigenesis. Mutations leading to deficient checkpoint inhibitors and the like are what allow cancer cells to survive and become established. As we have discussed previously, some of those mutations lead to expression of neoantigens, novel proteins that can be recognized by immune cells. As a result, identifying and targeting neoantigens are key to the success of any immune-based therapeutic regime. Tumor Mutational Burden is relevant in this context because it has been shown to be closely associated with therapeutic response – the higher the mutational burden, the more likely a tumor is to respond.

The Need for Better Biomarkers

Once again, we must come back to PD-1 here. As work in immune-oncology advances, it remains anchored in this one protein that appears to be at the center of virtually every aspect of the field. The reason is simply that PD-1 (along with CTLA-4) has been well-established for years as an effective target in immune-therapy. However, as has been noted repeatedly, for as good as PD-1 and CTLA-4 inhibitors are, the response rate is under 50%. If tests can determine which patients will respond to anti-PD-1 therapy, treatment regimes can be streamlined. However, like anything in biology, it’s not as simple as we’d like. While PD-1/PD-L1 expression has become an appropriately valuable biomarker to predict therapeutic response, nuances and caveats continue to emerge. In a 2016 review, Topalian et al note several of these, including variability of PDL1 expression at different time points and in tumors from different parts of the body of the same patient. Furthermore, some patients with no PDL1 expression respond to anti-PDL1 therapies anyway. This, the authors conclude, “call[s] into question the use of this marker as an absolute selection criterion for therapy.” Moreover, PD-1/PD-L1 expression is often quantified by immunohistochemistry, which may not provide consistent results. A good method, but one with significant variability.

Thus, additional biomarkers and methods of measurement are needed. And tumor mutational burden has been rapidly emerging as one of them due to the link mentioned above between higher TMB and response to immune therapy. Chalmers et al note that when mutations occur in DNA repair and/or replication machinery, the damage leads to increased rate of mutation. A fairly simple concept. However, there have been several studies suggesting “that mismatch repair–deficient tumors stimulate the immune system” (Le et al). In that study, the authors found that only 1 of 33 colorectal cancer patients responded to PD-1 blockade. That patient’s cancer was unique in that it was mismatch repair-deficient. “Therefore,” they conclude, “we hypothesized that mismatch repair-deficient tumors are more responsive to PD-1 blockade than are mismatch repair-proficient tumors.”

The conclusion is that as cells lose their ability to repair mutations and transform to tumor cells, the resulting production of neoantigens offers more “non-self” targets for the immune system. Of course, tumors can also suppress certain aspects of the immune system, which is why immune-oncology is necessary at all. So, we end up in a place where there are many targets for immune cells caused by high tumor mutational burden, and those immune cells may in turn need an extra boost provided by external intervention such as anti-PD-1/PDL1 treatment.

Interestingly, new research has linked a group of mutations in the PMS2 gene promoter to higher tumor mutational burden. Those mutations, according to Chalmers et al, are found in one in ten skin cancers and are therefore a small, but potentially highly relevant, area of interest. The authors are quick to note that more work is needed to determine whether this cluster is causal; however, it does point to the idea that additional clusters in both genes and/or regulatory regions could be significant for higher tumor mutational burden. This in turn could provide additional insight into immune activation and potential targets for therapy.

Even with something that holds as much promise as tumor mutational burden, the complexity of cancer suggests that more will be needed. There never is a single silver bullet. As in so many other areas, a multifaceted approach may be the best option for evaluating tumors and predicting responses. This will allow clinicians to offer patients the best possible treatment regimes and avoid things like PD-1 blockade in those who won’t see a benefit. To this end, David Fabrizio suggests that “a multi-pronged approach that combines tumor mutational burden with protein or gene expression information will ultimately have improved utility over either biomarker on its own.”

Indeed this has been borne out in recent literature. A study of glioma patients found that, while tumor mutational burden (called TML, or tumor mutational load, in the paper) does correlate with loss of mismatch repair (consistent with the findings referenced above), other hypothesized links did not materialize such as CD8+ T-cell infiltration. Thus, the authors conclude, “all of these biomarkers will need to be interrogated in the context of the aforementioned clinical trials to identify those that are associated with response” (Hodges et al). 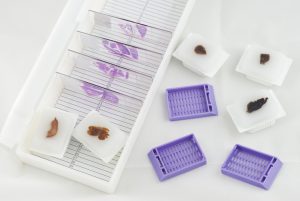 This particular biomarker has traditionally been quantified through next generation sequencing and comprehensive genomic profiling (CGP) through exome sequencing. CGP method is extensive, covering 300 more genes and which, according to one test developer, “detects all four classes of genomic alterations for solid tumors.” In the Hodges glioma paper, the authors used NGS and a custom panel of whole-gene targets. NGS plus a heavy dose of IHC allowed the team to look at tumor mutational burden in the context of DNA repair defects “that could render [the tumors] sensitive to immune checkpoint blockade.”

Because Predictive Immune Modeling is built on the foundation of gene expression, the analytes of the ImmunoPrism™ assay are certainly impacted by the mutations estimated using mutational burden. The ImmunoPrism™ assay provides expression profiling of escape-relevant genes, as well as immune profiling, and can create a multidimensional biomarker with more predictive power. While not a part of the current assay, we imagine that future versions of ImmunoPrism could include data such as mutational burden, or T-Cell or B-Cell clonality, to include as robust a picture of the immune system as possible. We’ve also considered approaching tumor mutational burden using RNA-seq, which has a number of advantages: (1) it quantifies only expressed mutations, not those predicted by DNA, (2) it offers more coverage than the previous standard of whole-exome sequencing, and (3) there is significantly more RNA present in a cell, so even limiting samples may be interrogated. Today – using the ImmunoPrism™ assay – you can build a powerful multidimensional biomarker, looking at multiple facets of the immune system, in one solid tumor sample. This is a significant step forward in the quest to capture the complexity of disease.

While tumor mutational burden has emerged as a potential indicator for therapeutic response, and its relationship with other biomarkers remains an important area of research. Further, as highlighted by Promega in their recent campaign, use of co-testing to characterize your patient population expands your potential patients for inclusion/treatment.  If you are interested in discussing how RNA-based tumor mutational burden might apply to your samples, or to learn how Cofactor’s ImmunoPrism assay could aid in your tumor analysis, please contact us at [email protected].

Find out what our ImmunoPrism assay can do.