Cofactor recently presented a poster at AGBT 2016, in collaboration with NuGEN, and I thought it might be interesting to share it here (in a blog format) for those of you who were not able to attend the conference. You will see below that this is a methods poster, in other words, we wanted to test and confirm a method to interrogate these molecules from exosome samples. We believe we have accomplished that and for next steps we look forward to better understanding what transcript and gene differences exist between the renal cancer and normal exosome samples. Here is a link to the product we used: NuGEN Ovation Single Cell RNA Seq System. Enjoy!

A Method for Surveying the Long-RNA Landscape of Exosomes

The emergence of next-generation sequencing platforms has enabled the discovery and interrogation of RNA from tissues, biofluids, and extracellular vesicles at remarkable levels. Recently, interest has grown in sequencing RNA found in extracellular vesicles called exosomes, because of their role in cell-cell communication and immunoregulatory processes [1]. The contents of exosomes have been shown to consist of multiple RNA types including, micro RNA (miRNA) and messenger RNA (mRNA), as well as other biologically active molecules [2, 3]. Extensive work has focused on assessing the miRNA content of exosomes and it’s role as a putative disease biomarker. However, other types of RNA, such as long-RNA (> 200 bp; long non-coding RNA [lncRNA], mRNA, and circular RNA [circRNA]), may play an equal or more important role in cellular communication and cause alterations to biological pathways that affect disease development. Long-RNAs are a minor proportion of the RNA material in exosomes and until recently, it was extremely challenging to generate sequencing libraries from the very small amounts of long-RNA extracted from exosomes. However, new methods have emerged, such as NuGEN’s Ovation® Single Cell RNA-Seq System, which enable a single library to be generated from extremely small amounts of long-RNA. Unlike poly(A) library methods, these libraries retain the full complement of long-RNA species (e.g. lncRNA, mRNA, and circRNA). In order to test the Ovation Single Cell RNA-seq System as an applicable method for generating next-generation sequencing libraries, consisting of multiple long-RNA species, and explore the population of long-RNA molecules in exosome samples, we applied the Ovation Single Cell RNA-Seq System to total RNA extracted from exosomes. The libraries were sequenced and the resulting data was analyzed to characterize the landscape of exosome derived long-RNA species. Here, we present the method workflow, number and types of observed long-RNA’s, relative proportions of long-RNA’s across multiple control and renal cancer exosome samples and propose functional categories for genes enriched in exosome samples.

Libraries from each sample were multiplexed and sequenced on the NextSeq 500 instrument (Illumina, San Diego, CA) as paired-end 150 base reads (2×150). The resulting reads in FASTQ format were aligned to GENCODE v24 lncRNA and protein-coding RNA transcript sets. Alignments were performed using Novoalign (version 3.02.05; Novocraft, Malaysia) in “-r all” mode to allow reads to align to multiple transcripts. RPKM values for the alignments were calculated from the BAM output files, using the standard RPKM formula, with a custom Perl script. Reads were also aligned to the hg19 reference genome using STAR (version2.4.1c) with option “–outFilterMultimapNmax 1” to only allow unique alignments [4]. Transcript RPKM values for each sample were loaded into Cofactor Genomics’ ActiveSite Differential Expression Viewer to derive aggregate and unique transcript counts. The software program Known and Novel Isoform Explorer (KNIFE) was used for circRNA detection and run according to the author’s recommendations [5]. The following command line was used: completeRun.sh $PWD/reads complete $PWD thisproject 13 sam circReads 67 1 none. RNA-SeQC was used to generate read designations for each sample [6]. Database for Annotation, Visualization, and Integrated Discovery (DAVID) (version 6.7) was used to identify gene functional annotation terms that were significantly enriched in genes shared across all renal cancer samples [7]. A list of gene symbols was generated for the aggregate dataset and was used as input into DAVID. 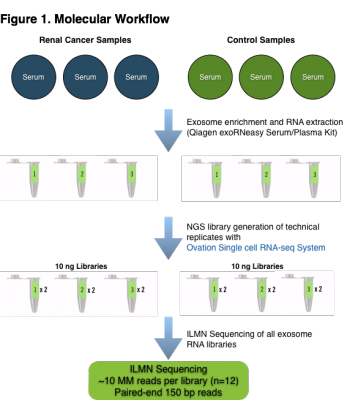 Molecular Workflow. Serum samples from renal cancer and normal control individuals (n=6) were enriched for exosomes and total RNA was extracted in order to investigate the efficacy of the NuGEN Ovation Single Cell RNA-Seq System for interrogating the composition of long-RNA molecules from exosomes. The NuGEN Ovation Single Cell RNA-Seq System is a random priming library method which will prime and produce cDNA from many types of RNA species in a sample. Duplicate technical replicate libraries were produced from each sample to investigate the variability induced by the Ovation Single Cell RNA-Seq library protocol. 12 total libraries were generated from 6 samples and the libraries were sequenced to ~10 million reads each on the Illumina NextSeq 500 platform using paired-end 150 base reads. 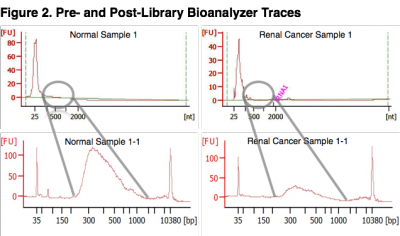 Read alignment percentages. The table above presents the percentage of read alignments for each library and RNA species (Genome = hg19 alignments; mRNA = GENCODE protein coding database alignments; circRNA = detection using KNIFE software; lncRNA = GENCODE lncRNA database alignments) including averages (Avg.) and standard deviations (SD). Although the percentage of read alignments across samples was not highly correlated, the percentage alignment between replicates was largely comparable. Differences in the RNA content of exosomes is to be expected, however technical replicate libraries should exhibit nearly the same sequencing metrics (as seen here) if the molecular steps in a chosen library method are robust.

mRNA and lncRNA Transcript Scatter Plots. Scatter plots were generated, using RPKM, for mRNA and lncRNA species to investigate the correlation and molecular noise between replicate library samples. The slope and coefficient of determination (R2) were calculated for each comparison. The plots in Figure 5A were generated using RPKM signals of protein-coding alignments from Normal (red) and Renal Cancer (blue) samples. The lower plot (green) displays the slope and R2 between Normal Sample 1-1 and Renal Cancer Sample 1-1. Replicate libraries exhibit excellent linear reliability while, as expected, the plot of Normal Sample 1-1 and Renal Cancer Sample 1-1 exhibits less linear reliability (a greater number of differentially expressed coding transcripts). Figure 5B shows the same plots for lncRNA alignments. The above plots exhibit higher levels of noise than might be seen when comparing RNA sequencing data from tissue samples. However, exosomes originate from many different tissues and also exhibit a temporal component. Thus, higher levels of noise may be inherent with these types of samples. In addition, sampling noise could arise during the sequencing process (i.e. low number of reads per sample) or molecular noise from the Ovation Single Cell System at the current input amount (10 ng). These sources of noise could be attenuated by generating additional sequencing reads for each sample and/or increasing the amount of long-RNA input to the molecular method.

Average Number of Each RNA Type.The average numbers of each RNA type, from normal and renal cancer samples, are shown in the table above. The average was calculated from the summed number of signals in replicate libraries. A lower RPKM threshold cutoff was employed to count only high confidence signals (mRNA = 100, lncRNA = 500, circRNA = 5). 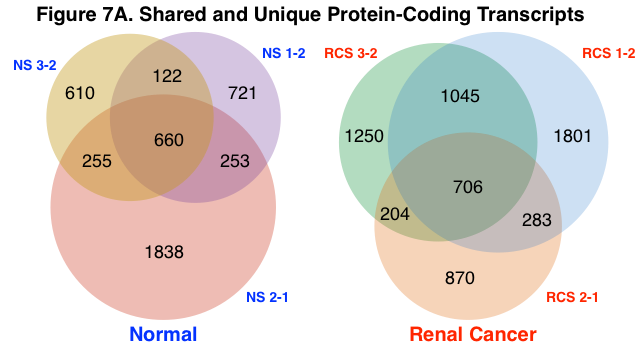 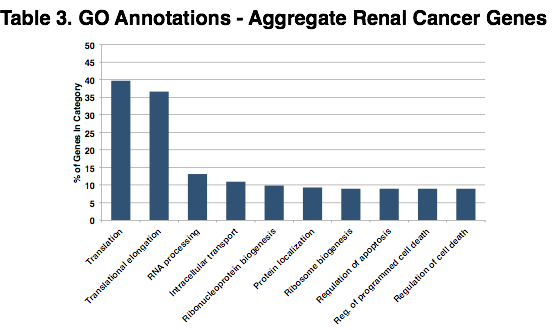 Gene Ontologies for Aggregate Renal Cancer Genes. The chart above shows the top 10 significantly shared gene ontology (GO) terms across the aggregate group of renal cancer genes. The 706 transcripts (including isoforms) shown above in Figure 7A – Renal Cancer, represent 191 genes which were used as input to DAVID. Over 75% of the coding transcripts in these exosome samples were involved in translation and elongation functions. 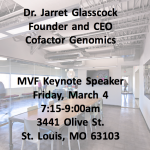 Saint Louis is Not a Cheaper San Francisco (and that’s OK)Cofactor Genomics, Entrepreneurship 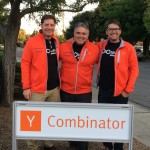